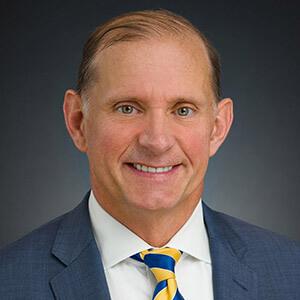 Matt Borsch is a Managing Director and senior research analyst for BMO Capital Markets covering managed care, hospitals and service providers. Prior to joining BMO in April 2017, Matt was at Goldman Sachs, where he covered managed care and service providers. With an equity research career spanning 16 years at Goldman, and another 7 years in the healthcare industry prior, Matt brings a wealth of experience and client relationships. Culturally a team player, in addition to previously holding the lead role for healthcare team policy and economic research, he has also played an active role in developing and mentoring junior research talent. Together with his team, Matt developed a comprehensive model of the health insurance underwriting cycle that he used in his published research to predict the 2006-2009 industry downturn. He has been recognized among the top 5 sector analysts by the Greenwich Research Survey, and has ranked #2 overall for healthcare services coverage (Bloomberg/Greenwich 2013). Matt has also served as an adjunct professor at Columbia University, where he taught a graduate-level course on the managed care industry. Matt holds an MBA and Masters in Public Health from Columbia University and he earned his bachelor’s degree in Economics and Mathematical Sciences (double major) from the Johns Hopkins University. Matt is also a Chartered Financial Analyst.

EUR Up, but WHY? - Global Exchanges

Spring Inflection - The Week Ahead

Thank You Sir, May I Have More Stimulus? - Views from the North

Drifting Without a Catalyst - Global Exchanges

IN Tune: Digging Into the Ag Chemicals, Fertilizer, and Lithium Markets

March's Mulligan - The Week Ahead

Green Shoots and April Showers - The Week Ahead

How Do You Solve a Problem Like Hot Housing? - Views from the North

The French Connection - Views from the North

A Quarter to Remember - The Week Ahead

Same As It Never Was - The Week Ahead

Wake Me Up When September Comes - Monthly Roundtable

Bond Ides of March - The Week Ahead

G20 in a New Era: In Search of Common Ground - Global Exchanges

My Punny Valentine - The Week Ahead

Vaccination Spreads - Views from the North

One Down, Eleven to Go - The Week Ahead

IN Tune: COVID-19: The Biden Presidency and What Lies Ahead

Recovery Reckoning - The Week Ahead

Election to Inauguration: An Update on Market Implications

Cybersecurity in the New Paradigm

The Top Technology and Business-related Cybersecurity Trends for 2020

Banking the Transition to a More Sustainable Future

Episode 09: The power of collaboration in ESG investing

Celebrating 15 years of trades that grow the good.